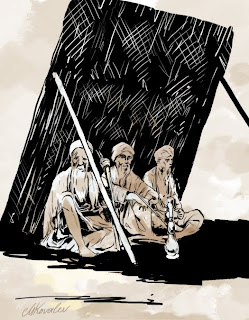 In late sixties Katya's father worked at a construction site in Iraq. And he told us about an incredible device that Iraqies invented to fight the heat. It was a large frame, size about 5 by 2 meters, about 30 cm thick, stuffed with dry seaweeds or grass. It was installed the way it could catch the wind, and then assigned people poured water on the device. The temperature in its shadow was a lot lower than the one in the sun. A similar device existed in Iran, basically it is the same concept of an evaporative cooler, but not portable: the windcatcher (Bâd gir).
Автор: braingreat на 23:55

braingreat
We are Katya, Anna, Misha and Oleg. We live and work in Moscow, Russia, and the reason we started the blog is because we wanted to collect cool things and habits demonstrating there is a clever person behind them. Things which are simple, clever and responsible at the same time. In Russian we call them "priznaki uma" - the signs of intelligence.